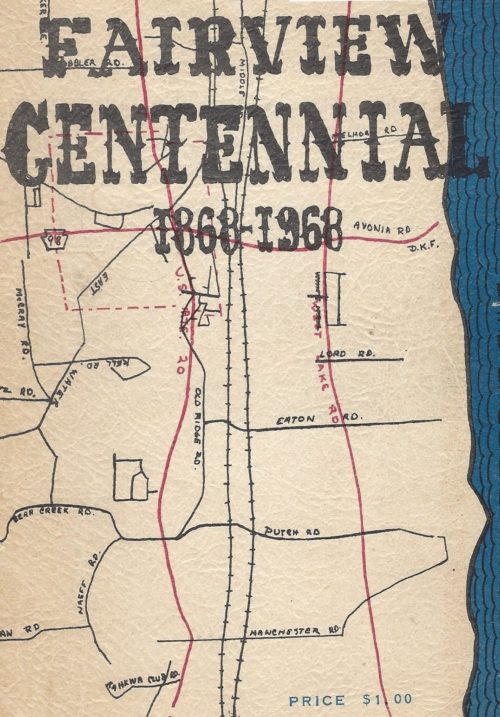 The churches in Fairview were quite supportive of the Borough Centennial Celebration.  The Presbyterian Church was the oldest denomination in the borough, dating back to the earliest settlements.  The original frame building burnt down in 1874 and a new brick one was erected in the same location on the corner of Avonia Road and Water Street before the year was out.  The brick building now standing is that very one, with additions, of course.

Holy Cross held its first mass in the Odd Fellows building on Main Street in 1963 then moved into the former Methodist Church building.  But this congregation was growing so fast that a building committee soon formed and their new building on Route 20, just east of the old Borough, was dedicated in October 1966. 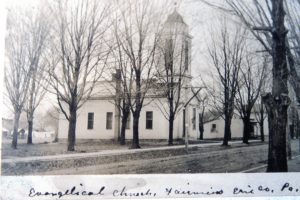 St. James Evangelical Lutheran Church began with the name St. Jakobus Church. The group first met in a school building in the Manchester area, and within a year, 1851, they erected their building along Old Ridge Road.  At the time this road was the Ridge Road.   Changes have been made over the years to modernize the building and enlarge it.  The small cemetery nearby is no longer in active use.

Although located far from the old Borough on the corner of Millfair and Heidler Roads, the Weis Library United Methodist Church also took part in the Centennial activities. An Evangelical group met in parlors from about 1833 to 1858 when the original part of the building was erected. Through mergers with other denominations it became a United Methodist Church in 1968. The cemetery there is still active.

St. Stephens Episcopal Church began as the Trinity Episcopal Church in 1907.  Initially it met over the drugstore owned by Dr. and “the Mrs. Dr.” Weeks.  That building still stands, located next door to the Wagner-Giblin Insurance building.  The congregation next moved to the room over the Weislogel Meat Market (a single building about where the parking lot is for Dollar General).  Next the group moved to the church building erected by the New School Presbyterians along South Avonia Road.  Finally, in 1965, the congregation moved into their own building along Dutch Road and changed their name to St. Stephens Episcopal Church. 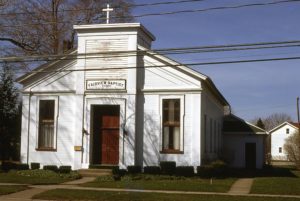 Seven churches were conducting services in Fairview Borough and Township in 1968, with the seventh being the Baptist Church on South Avonia Road.  This group met in parlors also, beginning in 1966.  They were intent on having their own building and soon invested in an old structure with quite a history.  The building was erected about 1842 as the New School Presbyterian Church.  Several churches were splitting over ideology at the time.

Those members who chose to remain with the original church continued to attend services in the Swanville area building.  In 1845 that group built another frame building beside the New School church in the Borough. The two factions of the church reunited in 1870 and together built yet another frame building in the same area.  No wonder it was called Church Street for a few years.  When the united church burned down in 1874 (see above) the flames took two buildings, leaving the New School building intact. 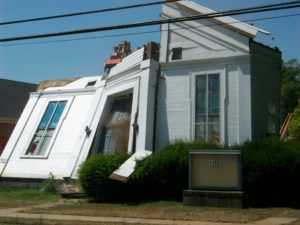 For about 50 years after the two factions unified, the New School building was the home of a Lutheran Evangelical congregation until the membership dissolved.  Next it was used by the Fox Textile Company, which made ladies lingerie, although it was commonly called a “shirt factory.”  The business went bankrupt after about eight months.  The Trinity Episcopal Church (see above) was the next denomination to use the building and then, in 1967, a Baptist congregation purchased the building and continued there until the few remaining members joined with another Baptist congregation.

Note:  Long after the Centennial Celebration concluded this building was used again by a congregation called “Believers Chapel.”  They soon built a new church on South Avonia Road, south of the old Borough, changed their name to the Bible Church and sold this well-used building back to the Presbyterians about 2003.  That group put the old building to good use for meetings, classroom space and their Food Bank program.  But in 2011 the Presbyterians found another use for the space and razed the building to make way for a community center and a parking lot.  Bats, that thought they had a home for eternity, flew out of the belfry and soon, the old building was history.