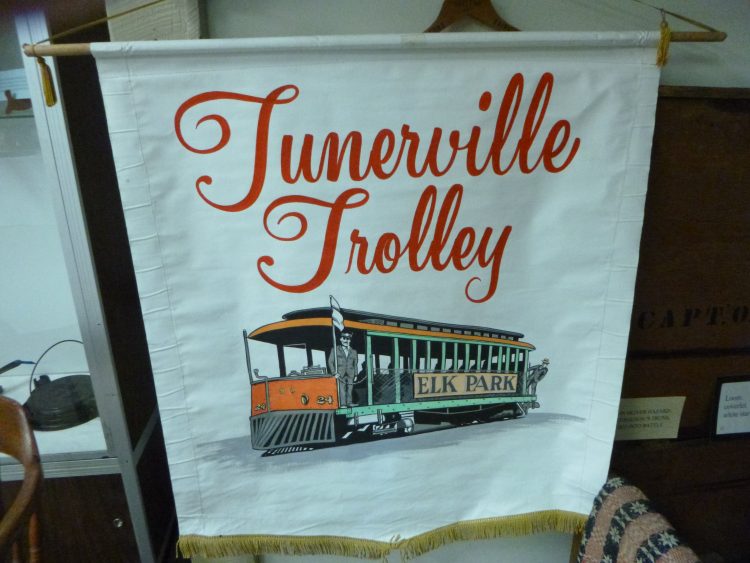 Last month this website changed hosts and in doing so a post and some calendar items were lost. We are back online so here is an attempt to recreate the missing post….

Our most recent gift was the banner of the “Tunerville Trolley” that is featured above. Actually it referred to the Conneaut and Erie Trolley (C&E) that operated between the two locations from early in 1904 until February 1922. It arrived in Fairview on June 14, 1903. Eventually the elin went as far east as Buffalo and as far west as Cleveland.

Route 20 was not yet paved and travel by trolley was easy and inexpensive. The trip from the borough to Central Park in Erie took 70 minutes and cost less than 50₵. The cars had heat and light and could seat 60 people.

On weekdays many farmers who lived all along the line would load their produce onto the freight cars to take it into market. Folks traveled in the passenger cars into Erie to shop and on Sundays other folks came west to visit their “cousins in the country.”

Also coming this way, groceries were sometimes loaded on those freight cars for the Dr. and the Mrs. Dr. Weeks’ drug store. Ice cream was the big item and when the Weeks received their shipment they hung out a sign to that effect.

Trolley stops were marked with a cement slab covered by a three-sided shed. The route of the trolley was along the Ridge Road to Bear 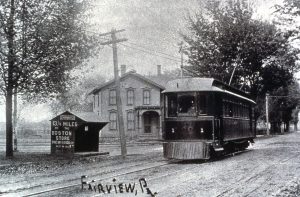 Creek Road, on to Water Street, crossing Route 98 with a stop in front of the Presbyterian Church, then on to meet Main Street (Route 20/Ridge Road) and on west to Girard. Another stop in the area was across from the Dobler Mansion. The slab in front of the church remained for many years after the shed came down but was removed in the mid-1990s with the installation of new sidewalks.

The trolley provided employment to a number of Fairview men who were regarded as important as the stagecoach drivers a century before. “They performed the duties of hosts, tour guides, public relations agents, salesmen and perhaps even counselors to troubled riders,” recalled an article in the Cosmopolite in 1985.

In 1910 the Cosmopolite published another article that glamorized the service with a description of the “Walnut Creek Gorge,” the “ever changing botany… and the views of the lake from the rise of the Ridge Road.”

A feature of the line was Elk Creek Park just west of Girard and in its day rivaled Waldameer. It was a popular place for family outings, dancing in the open-air pavilion, ballgames and more. The park continued for several years after the trolley ceased operating, and that is another story altogether!