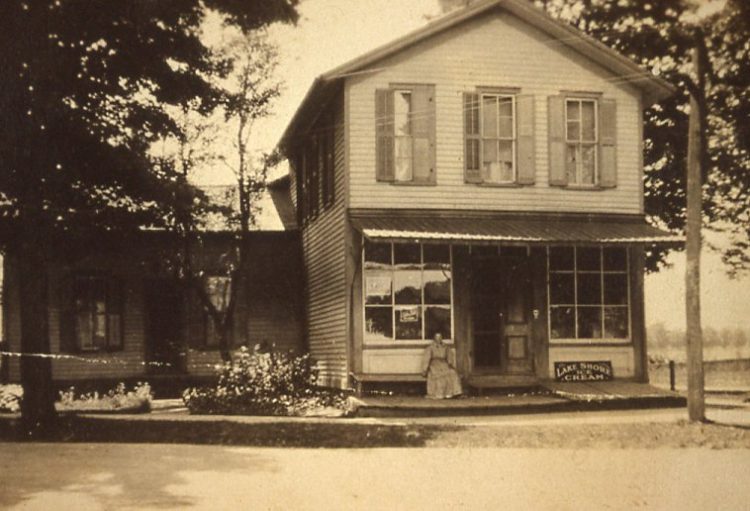 The Commencement booklet is a wonder.  Time spent reading it is well spent.  The booklet is simply full of facts!

Here’s what it says about Ruhl’s Store:

“Will Ruhl started his career as a business man in 1916 when he conducted a lunch counter in the Odd Fellows building.  Ten years later he started in business in his present store, which was formerly known as Fairview’s Drug Store.  Mr. Ruhl with his congenial wife has catered to the public for eight years. During this time his business has progressed wonderfully and they have gained many patrons and friends.”

Ruhl’s Store, you say.  Where is that?  Well, it isn’t anymore. The featured photo shows where it once was, on the southwest corner of Avonia Road and Chestnut Street.  Word was, the lady on the porch was”Limpy” Schaffer who had a connection to the store, possibly as a clerk.

But Ruhl’s Store is gone now, giving way to “The LIttle Store.”  Most Fairview folks will remember it.

The Little Store began in the fall of 1963 as a small stationery store on East Main Street in the old Borough.  It was owned by the Sawdy family who moved it into the northern part of Downey’s General Store (on the southwest corner of Avonia and Main Street) in 1965.  The Little Store opened onto North Avonia Road, which was then called North Garwood and added gift items and greeting cards. 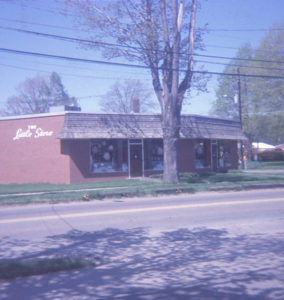 Two years after that, 1967, it moved into a new building on the corner lot which was to site of the Ruhl Store.

The Little Store had quite a run and when the Sawdys left they sold it to two women from White Hall Village: Ellen Boscher and Elizabeth Raimy.  The “Little Store” name continued elsewhere in 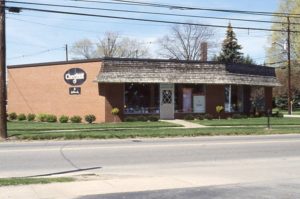 the county, but in that location in Fairview, the store continued as “Chestnut Place.”  The women eventually sold the store and in 1997 Colleen Loeslin – who also owns Creamland on Route 20 (less than 20 days to opening, folks!) – purchased it.

The store has thrived with expanded merchandise, greater varieties of cards and more.

Since so many are focusing on the year 2020 and the 100th anniversary of the passing of Women’s Right to Vote, it seems appropriate to mention that this story has four ladies in it:  Limpy Schaffer, Ellen Boscher, Elizabeth Raimy and Colleen Loeselin.  Good for them.  The “congenial”
Mrs. Ruhl might even be added to this list.