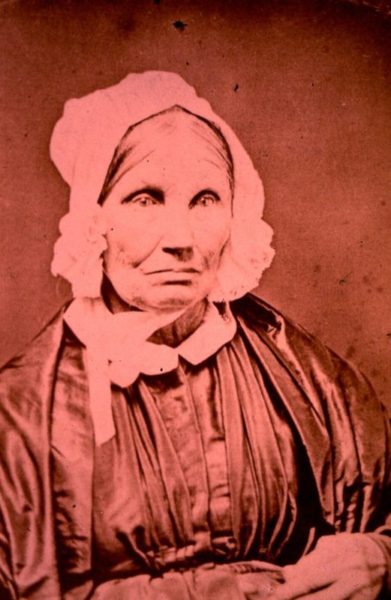 Whoops!  The recognition of Women in History Day nearly went by without a mention… it was yesterday, March 8.  The following are a few of Fairview’s outstanding women….

The featured photo is Elizabeth Canon Eaton, wife of the first minister to settle in the township. She lived in Canonsburg, PA with her parents. Her father was a minister and mentor to her future husband, Johnston.  Johnston first came to the area to preach in 1806.  A year later he returned to Canonsburg to marry Elizabeth and bring her back to Fairview to live.  She rode a horse through the woods to get here, dealt with marauding Indians and generally lived a pioneer life.  She bore nine children, took over Johnston’s farm duties as well as her own when he went into Erie to help build the fleet for Commodore Perry in 1812-13… and so much more.  Any pioneer person, male or female should be recognized for what they did for their developing community! Elizabeth lived to be 90 years old and was blind when this image was taken. 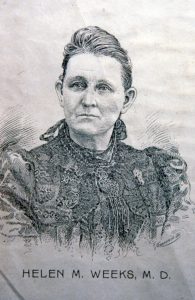 Helen Daggett Pollay Weeks, born in 1840, was married the first time to Samuel Bates Pollay.  They had been married five years when he, serving in the Union army, was killed in the Battle of Antietam in 1862.  She soon returned to the family farm in Girard Township.  She married again, in 1867 to Vermonter Welcome Joshua Weeks, who at that time was living in Girard. Together they attended the Cleveland Homeopathic College to earn their certification as homeopathic doctors.  They opened an office in Girard, then in 1873 relocated to North Garwood Street (now north Avonia) to open a drug store/doctor’s office. In 1897 they bought the brick house next door.  The house, now the Wagner Giblin Insurance office, displays out front the cement stepstone that Helen used to climb into and out of her phaeton carriage.  They made house visits and made their own drugs for the drug store, which was typical at that time.  He was called Dr. Weeks and she was the Mrs. Dr. Weeks.  Her practice consisted mostly of women and children and he tended the men and older boys.  Helen was one of a very few early women doctors in Erie County. She was a musician, a writer and belonged to the temperance movement, which led to the suffrage movement. Her complete story can be taught in the middle schools as a result of an “Out of the Box” project through Erie Yesterday.  The packet is always available for borrowing, free of charge. 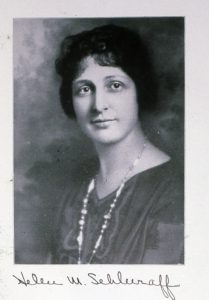 Helen Stone Schluraff certainly was well known in all of Erie County.  She was born in 1884 and lived in the large white brick residence that was razed a few years back.  Fairview Manufacturing now occupies that area.  Helen married an Erie man, Verne Schluraff who owned and operated a florist business.  They divorced in 1915 and she was awarded the family business and custody of the two children.  She proved to be quite able at managing the business and went on to try her hand at many other things… She was an active suffragette and once women had the vote she organized a local chapter of the League of Women Voters.  She served as its first president and was also president of the local chapter of the Business & Professional Women’s Club.  She was also a charter member of Zonta.  Once she became interested in politics there was no stopping her.  She was elected as the first woman county commissioner in the State of Pennsylvania in 1932 and served for 12 years.  She was a Republican in politics, known as “Mrs. Republican,” and served on county and state Republican boards, including in Governor Pinchot’s administration. She encouraged women to gain political knowledge and to get involved.  Hers is a grand story, to be told in much greater length sometime. 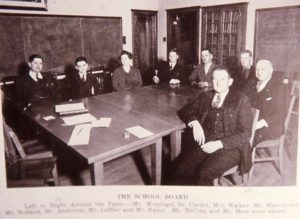 Another woman who served was Catherine Faner Walker (shown here as the only woman on this board).  She was born in 1886.  She married Vincent Walker who was involved in organizing Titan Tool and lived in a large home on East Main Street across the street from the business.  She and Vincent had nine children, many of whom remained in the Fairview area.  A few years after women won the vote in 1920 she ran for a seat on the borough school board – the township had its own board at that time – and won. She was the first woman in Fairview to do so.  Catherine was a leader in the community in many ways, including opening her home to the visiting Chautauqua troupe each year during the 1920s.  The school districts were still separate when she announced in 1944, after serving for 18 years, that she would not run for school board again. She was 58 years old and though that age was considered old by some then, she was well ahead of her time.

Just for fun, here is a little girl (born in 1928) who had quite a career as she was growing up, then entered into another kind of career.  Fairview can hardly claim her, although her father George lived in the sprawling house on the southwest corner of the main intersection in the old borough for a few of his childhood years.  He was friends with Charles Asmus who was the last Sturgeon descendant to own the Sturgeon House.  The story goes that George fell into a rain barrel at the Sturgeon House and his friend Charlie pulled him out, thus saving his life and the future life of American’s sweetheart, Shirley Temple who grew up to be quite important. Yes, it’s a reach.