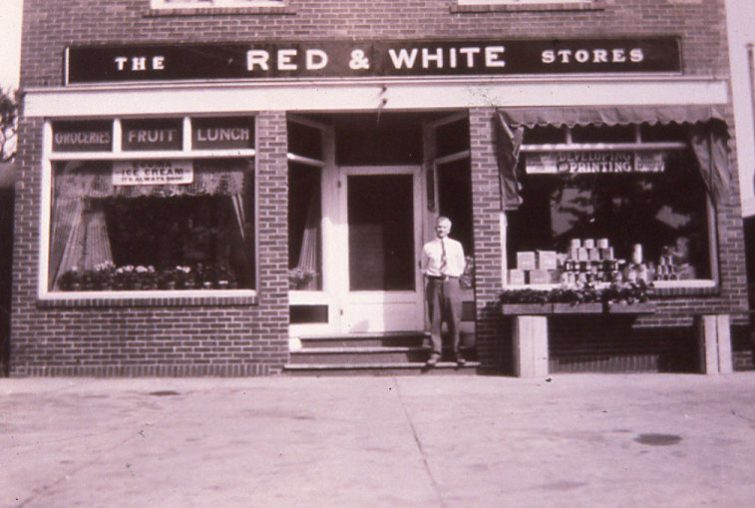 At one time three grocery stores operated in the old Fairview Borough:  Weislogel’s, Hauck’s on the northwest corner of the Routes 20 and 98 intersection, and the Red and White “Chain Store.”

Adolph L. Osterberg sent an official announcement of the opening of the Chain Store in a letter to the residents of Fairview and listed its special features “Only the best quality of merchandise will be handled,” he wrote.  The letter was dated May 23, 1925 and with that, the store opened and remained so for 50 years.

The store carried a full line of Drugs and Toiletries and also featured a soda fountain and grill.   They “are very popular at this time of the year 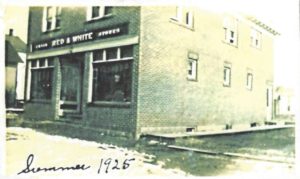 as well as a gathering place of the ever present tourists,” informed the article in the Commencement booklet of 1926.

Shortly before retiring Edith Heidler Osterberg, Adolph’s wife, was interviewed by Barbara Seidler for the Cosmopolite.  That interview is still available in the historical society’s publication Those Were the Days.

Edith graduated from high school in 1916, took the day-long test to teach and was awarded her certificate on her 18th birthday. She taught in several schools around the county, taking a trolley to get to some of them.  She also taught in Fairview Township.  In those days the teacher in a one-room school was in charge of everything: 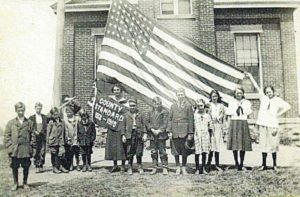 the furnace/stove, the cleaning, occasional small maintenance, the outhouse, as well as eight levels of classes and all the students. A teacher’s day was packed with activity.

Edith and Adolph were married in 1920, but it wasn’t until five years later that Harvey Walter built a two-story brick building next door to his Chrysler Garage (now Pennant Motors) and rented it to the Osterbergs.  It was there that they started their business and lived upstairs over the store.  The business did so well that three years later they were able to buy the building.  Their three children, Ken, Evelyn and Jack, all grew up there.

The store had large windows in front where Neil McCray once displayed his very special trophy from a Cleveland Air Races competition; where folks could look in to see who was at the counter having a soda; and where folks inside could look out and watch the “passing parade” along Main Street.

Edith once mentioned two special customers.  One was Garson Fall Sr. who was the superintendent at the B’nai B’rith Home for Children at the west edge of town.  He would occasionally bring his two sons in for a soda.  And, Welcome Joshua Weeks, a doctor in town who liked pistachio ice cream.  Ice cream was delivered to Fairview on the trolley and whenever the Red & White had it he was there for a dip or two.  He and his wife, “the Mrs. Dr. Weeks,” owned a drug store that also carried ice cream, but apparently not that flavor!

The drug store is now the location for the Thomas Testi Law Office and the Weeks’ home was the brick building next door, now the Wagner-Wiblin Insurance Agency.

Adolph died in 1951, but Edith kept the business going.  She was 75 when she finally put the building up for sale and in May 1975, the Red & White closed for business.

Note:  The Featured photo shows Adolph Osterberg outside his store.  A second photo of the store is dated and the third photo shows a young Edith Heidler and her students in front of the Swanville School. Edith is standing behind the sign.