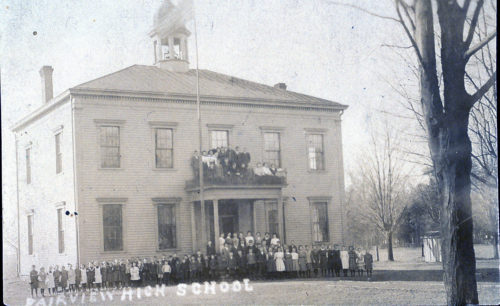 Fall crept in without making much fuss this year.  Many hardly knew it had arrived then, surprisingly, the nights turned cool. Showy colors began to pop out here and there.

Once upon a time in Fairview, this was the signal for some hi-jinks, all in the name of Halloween Tricks. Or maybe it was called Boys Will Be Boys.  Or it might have been called It’s Time to Trick the Farmer Down the Street.

The farmer was Perry Sturgeon who lived on the north side of Main Street at the Borough’s western edge.  He had a large barn on his property and kept cows.  Perhaps an even better name for the hi-jinks would be What Can We Do with Farmer Sturgeon’s Cows This Year?

An easy stunt was to lead one of the cows away from the others, jimmy the door into the Union School and park the cow in the first floor hallway.   Ah, but another year one was lured upstairs.  Cows seem able to climb up stairs alright, but don’t like going down too much. 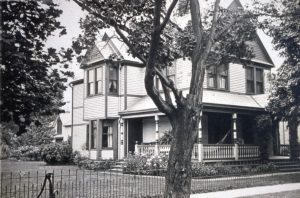 Another year the cow was tethered on the small porch over the front entry (see the school in the photo above). The school was a target too, for one year a farm wagon (no, not Perry Sturgeon’s, but rather one from Weislogel’s butcher shop) was wedged between the porch pillars and the front entry. (Weislogel’s shop grew into quite a large building in the same location and was there for more than 100 years.  Dollar General occupies the spot now.)

Often, just for good measure, a few of the cows were driven down the street to T. Wood Sterrett’s sprawling frame house on the southwest corner of Main and Garwood Streets. (Garwood is now Avonia Road and Burger King is now on that location.) Sterrett woke to the sweet sound of mooing cows, waiting for feed.  (Some will remember a brick house there before Burger King.  The frame house burned down in 1916 and was replaced by that gracious brick home.) 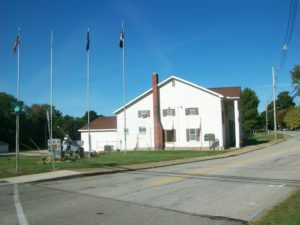 Boys everywhere loved the outhouses too…turning them over, moving them to another location, making scary noises outside when they knew someone was inside… Outhouses, just as all the items in the parentheses above are long gone.  Indoor plumbing replaced them, so some progress is good.

Of all the things mentioned here, one still remains.  That’s Perry Sturgeon’s barn.  After the World War I veterans organized the Fairview chapter of the American Legion. His barn, purchased in 1945 from LeRoy Weislogel, became their headquarters and is still in use.