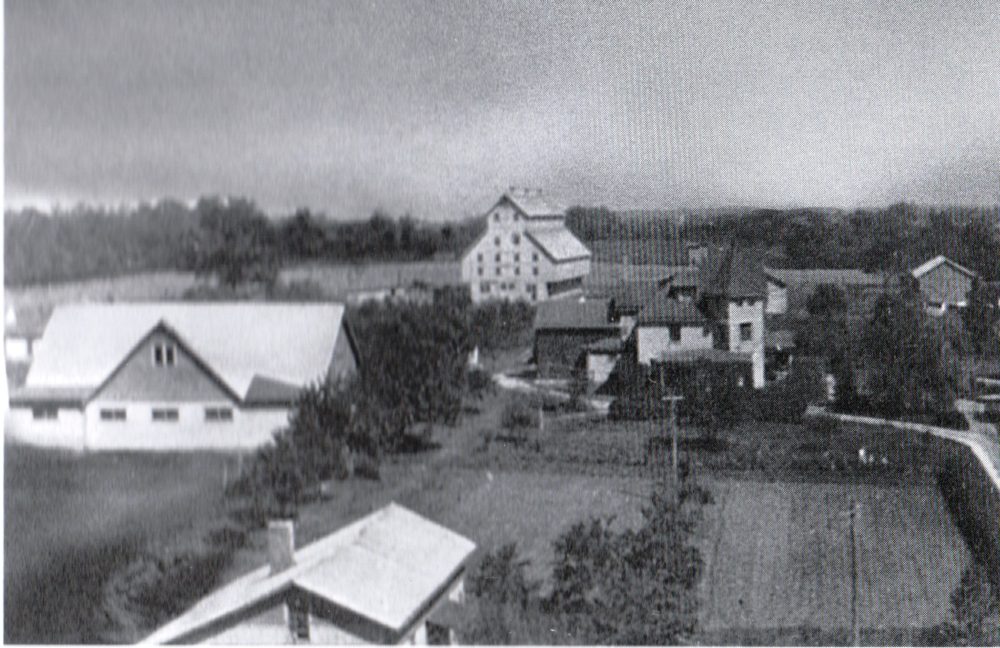 The Dobler Mansion on Route 20 at the western end of the township is for sale.  It is one of two buildings with an extensive history in the township that are currently on the market.  The other structure is the main building of the old White Swan Dairy, located on West Lake Road.

The photo above is an overview of the main part of the Dobler Farm.  It extended to both sides of Route 20, with another huge barn on the south side.  The property includes possibly the largest residence in the township and was built for Albert Frederick Dobler.

Dobler, nee Frederick Albert Fink, was born in Germany in 1844 to Jacob and Christina Fink.  He was four when his parents immigrated with him and a younger sister to the McKean area in Erie County. His only brother was born the same year.  In 1849 he went to live with his uncle, John Dobler, in New England.  John was rich and among other things, owned a brewery located in Albany, New York.  He adopted the boy and by the time young Albert Dobler was 21, he was managing his uncle’s brewery.

The farm in Fairview Township originally was Daggett property.  Dobler purchased it to grow barley for his brewery business and also raised cattle and Red Polled swine.  The mansion was completed for him, his wife (Emma Mott of Fairview), daughter and son in 1894.  The mansion was large enough to have servants quarters off the kitchen.  A portion of the third floor was designated as a sewing room where local women came in to sew for the family. (Look closely at this early photo of the mansion and you will see a man, presumably Albert Dobler, sitting on the left porch beyond the awning.)

The daughter, Emma Catherine, married in 1896 and moved to Denver, Colorado and the son, John Frederick, married three years later and remained in the area.  Altogether, Albert and his wife lived in the house about a decade before her death.

Dobler’s story and that of the mansion was reported in an article in the Cosmopolite on July 18, 1984.  The ownership of the property was contested in court after Dobler’s illness and remarriage.

In 1917 the property, which included 300 acres, was sold to the Erie County Poor Board.  The Poor House facility was built on the property and the mansion was used as a residence for the manager.  Over the years it also was used as a nurses’ residence, a residence for tuberculosis patients, and the location for the Northwest Jaycees Halloween Haunted House fundraiser.  It also stood empty from time to time and after a fire in the rear area there was serious concern about its future.

Fortunately, an architect saw some great features in the house and reclaimed it, living in it at the same time.  Much of its grandeur was restored and now, it is for sale once again.

Like the White Swan Dairy building, this mansion is a part of Fairview history and we wish the best for the future of both buildings.

One thought on “Building for Sale: Dobler Mansion”