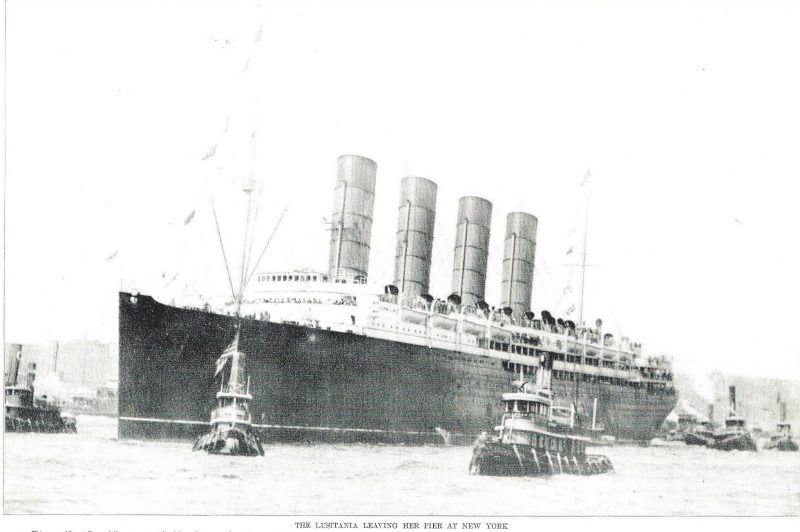 One-hundred and five years ago, a Saturday, three ocean liners were moored along the New York Piers, waiting to depart for various countries across the Atlantic.  One was an American ship, the New York, headed for Liverpool, England.  The British Anchor Line had a ship, the Cameronia, sailing for Glasgow, Scotland.  The third was the fastest ship sailing the waters at the time, the RMS Lusitania, owned by the British Cunard Company, also heading for Liverpool.

The hustle-bustle that morning was intense.  More people were leaving for Europe that morning than any other departure date that year.  The war in Europe that had been waging almost a year had depressed casual-travel numbers, but now that spring was here the outlook seemed to improve, despite the active U-boats in the waters off the British shores.

These liners were passenger ships, after all.  Civilians were on board, not soldiers or contraband.  Not military goods. 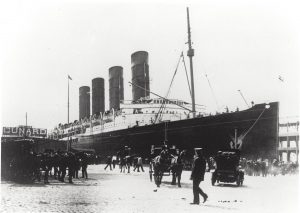 Lusitania.  Who would complain about that?  The Lusitania was a splendid ship, with every kind of update and comfort.

This directive delayed the departure of the grand ship by three hours, with passengers and their belongings, plus more supplies to accommodate them, needing to be transferred or loaded.

About 1 p.m. “the great ship backed away from the pier, swung her bow downstream toward Sandy Hook and headed out for the open sea.”  The next five days were idyllic.  Pleasant weather, calm seas, gourmet food, excellent service, lively conversation.  Everything to make the experience fine for passengers was accomplished.

But the German Embassy had put a warning in the New York Times the morning of departure, and on Friday, May 6 , during the second seating for lunch, James Blaine Miller, who had lunch during the first seating, was standing by the railing when he saw something in the water that he immediately recognized as a torpedo.  He was on leave of absence from the US Geodetic & Survey Service (the captain of his own ship), and he was headed to Glasgow to get his master’s degree.  He was one of the transferred passengers from the Cameronia. 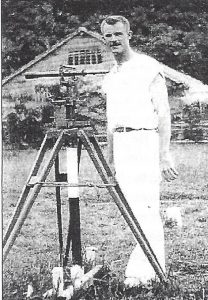 Miller was from West Millcreek. His father was an Erie lawyer, Thomas Miller, who had also been the County Superintendent of Schools at one point early in his career.

On that voyage the ship carried 1,959 people, of whom 1,257 were passengers. A total of 1,195 were lost after the U-boat attack that was followed by a second unexplained explosion.  Of the 189 Americans aboard, 128 survived. Among the lost Americans were millionaire Alfred G. Vanderbilt (who could not swim!); Elbert Hubbard and his wife Alice from the Roycroft Artisan Community in nearby East Aurora, NY; Charles Frohman, theatrical producer whose great achievement was producing Peter Pan; and various others, two of whom wrote books about their experience.  Also lost was James Blaine Miller.  He was last seen putting on his life jacket.  His body was one of the last to be recovered, and the life jacket was nowhere to be seen.

Miller was proclaimed a hero, giving up his life jacket to someone else who needed it more.  His remains are buried in the Fairview Cemetery.  His unusual gravestone is large and square, reminiscent of the choppy waters of Lake Erie.

In time, three years to be exact, the U.S. would enter that war in Europe and it would become a world war.  One of the reasons to become involved was the sinking of the Lusitania.