February is Black History Month and Fairview has a very proud claim to one of the outstanding members of Erie’s Black Community.

Earl Emerson Lawrence was one of four children to an amazing mother, Emma Gertrude.  She came from Buffalo, married John Lawrence and 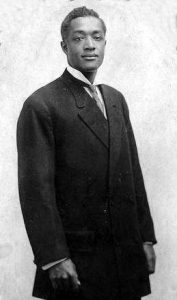 when he died at 28 years of age she raised those four children by herself.  With help she opened a cleaning and dyeing business a few doors from her home on West Third Street. It is listed in the Erie Business Directory as early as 1910.  Her daughter Effie and her three sons, Charles, Ray and Earl (photo on right), helped with the business until Ray and Earl broke away to follow their own interests.

Ray died at a youngish age, but Earl, who was born in 1881, had a long and extraordinary career as a performer, 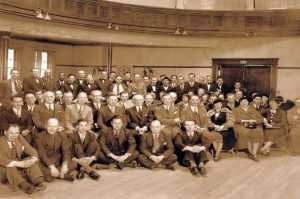 music teacher, and owner of a music store for 20 years.  He taught groups and individuals and was the first black member of the Erie Philharmonic (photo on left).

His accomplishments go on and on.  It is impossible to list all the places where he performed – in private homes as well as theaters. He played (proficiently) about 15 instruments and could teach others to learn even more.

He did some teaching in various county school districts and in 1940 approached the Fairview Joint Borough and Township School District to teach in all the buildings within this district.  He might have found his way to the Fairview schools through the B’nai B’rith Home for Children (the remaining building is now the Towne Terrace Inn), where he volunteered his time to teach string instruments and piano to the children there.

By 1940 Earl had returned to school – Edinboro State Teachers College and Pennsylvania State College – to prepare himself to teach in a school district.  He was 59 when he earned this certification.

At the time Earl began teaching in Fairview the school district had no music program.  Once a year one of the high school teachers would direct a play or musical.  Now, with Earl on board, younger children learned any number of instruments and the high school developed a glee club, an orchestra (photo on right) and even a marching drum and bugle corps, although only the drummers performed that first year. 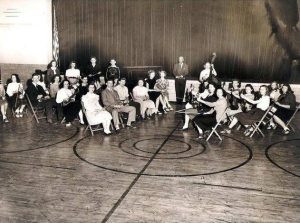 Earl was more than just a musician, performer and teacher.  He was a fine person, well liked by his Fairview students.  After just one year in the system the seniors dedicated the yearbook to him ”as a tribute to the services he has rendered to make our school days at Fairview High happy, ‘musical’ ones.’” Many of his students remember the extra hours of instruction he offered and considered him to be a good friend. 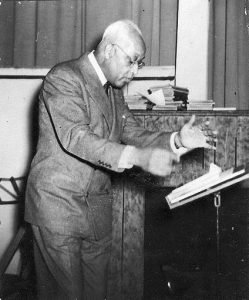 Earl and his wife Belle had one child – Ada – who was among the first black teachers in the Erie School District and also was well respected and beloved by her students.

When Earl retired from Fairview in 1951 the school and community had quite a farewell reception for him as well as a full-page tribute in the yearbook.

About 18 months ago the historical society had the opportunity to acquire a memento of Mr. Lawrence – his square grand piano.  Through the extraordinary efforts of a county historian and a philanthropist this became reality. 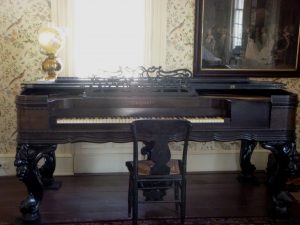 The Lawrence piano adorns the parlor. It is a proud part of the display of a typical parlor of the Victorian era (the piano dates to the 1880s).  It does not play, but it is not required to.  The fact that Earl E. Lawrence, and yes, Erie’s Harry T. Burleigh, a concert soloist, known world-wide as the composer of art songs, and singer of spirituals, played it in the past are enough.

And, while it is the Society’s tie to Erie’s Black Community, it also represents a wonderful piece of Fairview’s past.

For more about Earl Lawrence, plan to attend our April 15 meeting in cooperation with the Jefferson Educational Society at the Sturgeon House at 7:30 p.m. when Mr. Johnny Johnson, a retired Erie teacher and curator of the Lawrence papers will speak on “How Music Will Travel from City to County.”