Surely everyone is aware by now that 100 years ago on August 26 the 19th Amendment granting women the right to vote was ratified.  The U.S. has celebrated International Women’s Day even longer – since February 28, 1909.  This year it will be celebrated on Sunday, March 8.  If the historical society were to honor only one woman on this Sunday, it would most likely be Helen Stone Schluraff who died in 1964.

Helen grew up in Fairview, her father was George Stone and her childhood home was a large brick house on Avonia Road.  Some folks will 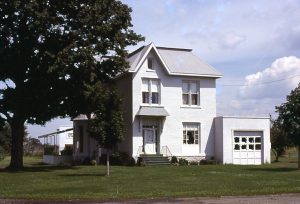 remember it as the house that stood in front of the Avonia Egg Market.

Helen had a great many advantages in her young life.  She attended Wilson College in Chambersburg, and in 1904 was married to Verne Schluraff, a rising young Erie man who owned and operated a florist business.  The wedding was a lovely ceremony that took place in her childhood home and one newspaper report listed all the guests, described her dress etc., and included that the desserts were so plentiful they were “an embarrassment of riches.”

But sometimes life just doesn’t go right, even with all the advantages.  The couple had two children, a boy and a girl, but after 11 years of marriage, she and Verne divorced.  Helen got the children and the floral business.

She had no experience with the business, but was determined to succeed, and succeed she did.  A great deal of her business was decorating houses for happy occasions – weddings, baptisms, etc.  Soon she was running the second largest floral shop in Erie.

Then she spread her wings even further.  She started a lunch group at the YWCA for working women.  The women soon organized and were chartered as the Business and Professional Women’s Club of Erie.  Helen also was a charter member of Erie’s chapter of Zonta International, and she served as president for both of these women’s groups. And yes, she was a suffragette.  After the 19th Amendment was ratified she helped to organize a local chapter of the League of Women Voters, becoming its first president.

She was a joiner and a doer.  She was a leader.  When the stock market crashed she was urged to get into politics.  She was a Republican and ran for the position of County Commissioner.  She won and was the first woman in Pennsylvania to hold that office.

Helen served three full terms, a total of 12 years.  Listed among her accomplishments is the fact that the Erie County Tuberculosis Hospital was built out of current tax funds without a bond issue during her years of service.  She advocated a strict economy in an effort to reduce taxes. She was honest and kept her promises. On November 6, 1949, the Erie Sunday Times praised her, adding “her advice was sought and respectfully heeded by many a male officer holder and seeker.”  Even staunch Democrats admitted to voting for her.  Said one, “She was a wonderful person and an excellent commissioner.”

Helen left office at 60 years of age and continued to work for the Republican Party, for Governor Pinchot’s administration, for the Daughters of the American Revolution, and for the Daughters of the American Colonists.  When the B’nai B’rith was looking for a temporary location to place orphaned Jewish children she volunteered her childhood home on Avonia Road. Her interest in children included her serving as board president of the Sunnyside Home for Girls in Girard.

Helen was the impetus for the Fairview Council of Republican Women obtaining a charter in October 1960.

She “pushed for women to be heard… she was a bit of a statesman,” said another accomplished woman in the Fairview area.

So, this year on the International Women’s Day, we honor Helen Stone Schluraff.