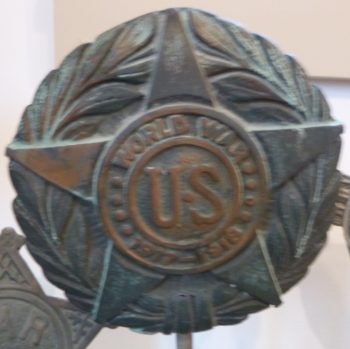 The third man to die in battle was Lawrence H. Roland.  He had one sister who died at four months of age in 1901.  Now an only child, when his father died six years later his mother moved the two of them into Erie.  Lawrence’s grandparents, Joseph and Catherine Stove, still lived in Fairview Township along Route 5 on a farm.

The number to gather ’round him for a send-off to military training was small.  How his mother and grandparents must have worried… the only surviving child going off to battle.  They may have been comforted by the fact that he would be assigned to the same company as another Fairview man, Edward Goetz.  They would both be serving with Company C of the 320th Infantry, 80th Division.  Both men were in their mid 20s.

By the late summer and early fall of 1918 there had been fierce fighting all through sections of France for weeks.  Russell Silverthorn died in battle in August.  Edward Goetz died in September.  Now, in October, even as there was talk of an unconditional surrender, battles continued in the Argonne Forest, at the St. Quentin Canal and near the city of Cambrai.  On October 11 Lawrence sat down to rest a moment and was shot by a sniper.

One month later, on November 11, the Armistice was signed to end World War I.

We celebrate the end of that war and the 100th anniversary of the signing of the Armistice tomorrow – November 11, 2018.  Let us ring bells at 11 a.m. for the brief peace that followed.  Let us ring them to remember Fairview’s own men who died in that war and to honor all those who served.

Let us ring the bells for all veterans of all wars.