The 1926 publication that served as a Fairview High School Commencement booklet included some interesting history…  small reviews of businesses, in particular.

Two auto garages were included.  One was owned by Neil R. and Ralph E. McCray, whose grandfather, Christian Rusterholz, loaned them money to construct a building at the east end of the borough where Route 20 and Old Ridge Road come together to form a wedge. It opened in May 1922.  The Spusta Auto Center is located there now.

Neil had served in World War I, returned home then left again to take a two-year flying course offered by the Army.  It was when he came back to Fairview a second time that the brothers went into business.  They were hard workers and soon added a partner, Martin Anderson.  They also became “sub” dealers of Chevrolets.  (They were so successful selling cars for a dealer in Erie that their sales outnumbered his.)

Apparently, they also sold gasoline, for the photo at the top of the page shows a woman filling her gas tank there.  Imagine that, at that early moment in auto history! Unfortunately, we don’t know who she was.

“As the… business developed, the selling of the Hudson and Essex car was added,” stated the Commencement booklet.  Ralph was the mechanic (who eventually owned a large number of patents) and Neil and Martin sold cars.

Neil was consumed with flying, however, and approached Henry Herbol about an open field he owned along the south side of Route 20 at the west end of the borough.  In 1928 his airport became reality and he sold his partnership in the garage to Martin Anderson.

“In 1928 Neil had two truly big ideas in mind: one was to start his own airfield and the second was to buy the largest, most prestigious house in Fairview, aptly called the Sturgeon Mansion,” states the book Cloud Busters.

The “mansion” also has seen a number of uses and owners. Today it is the headquarters for the Fairview Evergreen Nurseries, Inc.  It also has a short history in the booklet. 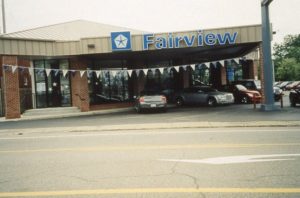 The second garage mentioned in the Commencement booklet was the Stork and Walter Garage.  The Commencement booklet tells the history of the land as far back as 1840 when it was purchased by Walter Warner.  He built a hotel and stage barn to accommodate the traveling public (by stage, of course).  Warner sold the property to Thomas Dunn who continued the operation.  Later George Shoemaker purchased the property and “converted the buildings into a brewery and residence.”  This was the cider mill that was located on what is now the used car lot.

According to the booklet the cider mill was closed and vacant for several years before Carl Stork and Harvey Walter, who owned the “tin garage” on North Garwood (now North Avonia) Road, purchased the land and moved their business there.  They eventually served as a dealership in Chryslers and Plymouths.

Their building underwent several remodelings, at least one followed the design of Harvey Walter, who eventually became the sole owner.  Harvey also was a World War I veteran.  He returned home to work on the family farm on Dutch Road, then began painting buildings, then worked as a mechanic and in 1920 started that tin garage with his friend Carl Stork, according to an article in Those Were the Days.

Pennant Motors is on the site today.

Note:  both books – Cloud Busters and Those Were the Days are available for sale at the Sturgeon House.