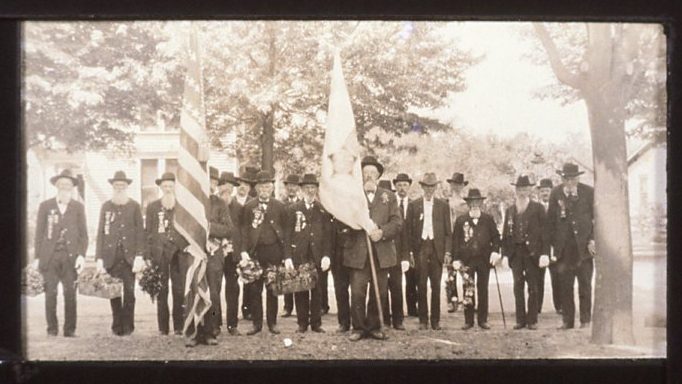 Of all the seasons, Christmastime is among the most sentimental.  Childhood memories come flooding back and those who have good memories hope to relive them in some way, or recreate them for their own children.  Christmas is a religious holiday and is also a family time that means sharing love as well as gifts.  But, there is a melancholy to it, especially in time of war.  Soldiers frequently are promised they will “be home for Christmas,” though that promise does not often come true.

During one war, however, an attempt was made to keep such a promise.  In 1863, in the midst of the Civil War, the entire Pennsylvania 111th Regiment from Erie County was sent home for the holiday.  This regiment was formed in February 1862 and sent to Baltimore for training.  The average age of the recruits was 21.  Once away, the men would not see home again for nearly two years and many of these men were from Fairview.

Following their training the regiment was sent off to battle… and there were many battles.  In 1863, during the Battle at Gettysburg they served with such valor at Culp’s Hill that a monument was later erected in their honor.

By November 1863 the weather had turned miserably cold.  News from the front was received in an agonizingly slow process and Erie County families worried that their young men were suffering as much from the weather as from war wounds.  As 1863 neared its end, they were cheered by the fact that their sons, brothers, fathers and husbands would soon be at the end of their two-year enlistment.

On November 23, a Monday, the regiment participated in the Battle of Lookout Mountain where a bronze tablet honoring them was later placed on the palisades of Point Lookout.  Two days later they fought in the Battle of Missionary Ridge.  They fought these battles under terrible conditions.  When the weather turned cold they had neither blankets nor overcoats.  They began the latter battle with a supply of rations for one day, although the battle lasted eight days.  During that time they received more rations, but only enough for three more days.* They built fires at night to keep from freezing and cheered themselves as best they could.  December and Christmas were coming.  Perhaps they comforted each other with stories of days and celebrations gone by.  Surely they longed for home and the warmth of family and friends as well as the family hearth.  At the end of that battle they began a 12-hour march back to their camp at Lookout Valley, Tennessee, a distance of 26 miles.

Said their commander, Lieutenant Colonel Walker, “The sturdy valor and uncomplaining endurance of my men suffering from hunger and cold are only another exhibition of the pluck of the American volunteer.”**

Meanwhile, Congress passed an act to encourage reenlistments among the seasoned fighting men.  As were other regiments from other states, the Pennsylvania 111th was needed to help win the war.  The men were offered a bounty of $402 each plus a 30-day furlough that would not begin until they had actually reached home.  Almost every man in the regiment reenlisted and they were officially designated as the “Veteran Volunteers.”

Getting home was now their paramount concern.  It took most of the month for the remustering to be concluded.  They boarded unheated freight cars and began their two-week trip back to Erie County.  They built fires in the cars to warm themselves and managed not to burn either the cars or themselves. Their route was circuitous.  On reaching Nashville they went on to Indianapolis, then Cleveland and finally to Erie where they arrived on January 14, 1864, to begin their 30-day furlough and finally, to celebrate Christmas.

The reception for these heroes was huge and joyous.  “Gallant Soldier, Welcome Home,” proclaimed the banners across the streets and displayed from windows.  There was a formal celebration at Brown’s Hotel in Erie, with speeches by Erie’s mayor and a huge feast prepared and served by the ladies of the community.

The next day they were released to find their way to their own homes and families.  “The bronzed and eager veterans were dispersed among the homes which they had left nearly two years before, for the enjoyment of their well-earned vacation.”***

Although belatedly, they were Home for the Holidays.