It is obvious to the members of the Fairview Area Historical Society that every woman who grew up in Fairview (Township or former Borough) was special and worthy of mention during this Women’s History Month.

So, in the search for another woman to highlight, this (featured) photo popped up.  It must have been taken during World War II.  Imagine being a mother and seeing her seven sons sign up to go off to war.  That would be heart-wrenching.  Did Julia Niebauer, this mother, serve on the Draft Board? Hmm.  One quick phone call to a descendant for the facts revealed that this mother was actually Ida Niebauer, Julia’s mother-in-law.  And that led to a torrent of information about Julia.

Julia was born in 1909, one of the four Bausch children.  They were a farm family and one day, when she was older, she was at the Niebauer farm picking strawberries when she met one of the Niebauer sons, Ferdinand (Ferd).  He was in the seminary at the time.  One thing led to another, as it does in a romance and they were married. Actually, they eloped, possibly because of the opposition from Julia’s family.  This was a time when the few Catholic families in the township were not well received.

was – always – either pregnant, or giving birth.  She was a large woman, one daughter described, and the only way the other children knew she was pregnant was when the doctor came to the house with his black bag.

With 12 children there are a great many family stories. Julia had converted to Catholicism and was “strong in her faith, quite religious.”  Also, “She had a caring heart… There was always fresh fruit on the table… Her front door was always open… She was always very pleasant and confident… In times of stress she would be so positive…  She listened…  She gave good advice… She was humble… She had a sense of humor…  She was such a lady.”

In 1931 it became obvious that Fairview needed to establish its own fire department.  That group was soon organized and Ferd was a charter member.  It wasn’t until 1947 that an auxiliary formed with the purpose of assisting the firemen and “any member of the community who was a victim of disaster,” states the Fairview Centennial booklet.  The auxiliary was there to make sandwiches and coffee for the men when they returned from fighting a fire, and they were there to make pies to serve at the annual Firemen’s Picnic. They raised money to help the fire department purchase equipment and one of the many ways was their annual bake sale, setting up a table at Weislogel’s food store (now Dollar General). Those were the days, and Julia was a great part of that.

In late 1935 Ferd became the postmaster of the borough post office.  In those days the postmaster supplied the location and equipment.  It was in various stores until Ferd arranged for space on the east side of the two-story Odd Fellows Hall, which was located on the northwest corner of the intersection of U.S. Routes 20 and 98.  The business had only been there a few months when very early on the morning of May 24, 1944, two trucks collided in the middle of the intersection. One carried a cargo of oil and turpentine. “In an instant the whole scene was a mass of flames,” said the driver who had been heading west.  He survived, the other driver did not. Nor did the building with the recently opened post office in it.

Nevertheless, the very next day mail was delivered to the Niebauer residence a few doors west on Main Street (U.S. 20) where it was sorted on the dining room table. Ferd quickly arranged the living room to serve as the post office and it remained there until the harness shop at 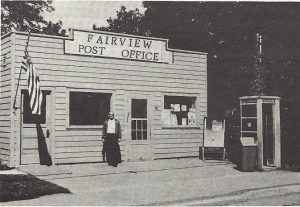 the back of his property could be adapted to handle the mail.  By Thanksgiving he had built a one-story frame structure beside his house that served as the borough post office until the (present) brick building was built and dedicated in 1963.

While the business was still operating in the living room a dividing wall was set up so the children could play on the other side.  One daughter recalls that Julia, who was by now an assistant postal clerk, told the children that if they needed her they only had to bang on the wall.  With seven boys in the family, it’s likely there was some banging.  That same daughter recalls that she thought one of her brothers had coughed up his tongue and spit it out.  Shrieks!  She banged on the wall.  All were relieved to discover that the tongue was actually just a big wad of Teaberry gum.

While the post office was still located in Ferd’s new Main Street building, Julia served as Manager of the Times News distribution.  To help with that at least six of her children had paper routes.  In 1963 a fine brick building was erected on North Garwood Street (now Avonia Road) 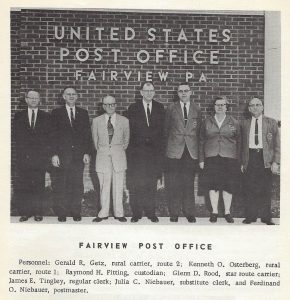 and the post office business moved into it, with Ferd still serving as postmaster.  His own building was soon adapted for use as a garage.

Julia liked to travel and on her Wednesday afternoons off she would gather whatever children were in the house and drive off somewhere – often to Oil City. On the way back they usually stopped for ice cream.

The closest Catholic Church was in Girard and on Sunday mornings Ferd would borrow a school bus to take the family there.  Later a Catholic congregation began meeting in local buildings… the Odd Fellows Hall and then the old Methodist Church on Water Street. As the congregation grew Ferd led the push to establish a new church building and when it opened in 1966 Julia was also deeply involved, with the Rosary Society and more.

Ferd died in 1973 at 68 years of age.  He left a life insurance policy for Julia who decided that all the children should benefit from it.  Each year she took one child to a location of his or her choice.  If the child was married, the spouse also went and if there were children, they went too.  Often the destination was California to visit with her son Tom. Another daughter remembers visiting with Tom then going on to Disneyland.  Julia kept a diary of her travels, which is still in the hands of family members.

As her children grew up, married and had children of their own, Julia became a thoughtful and loving grandma… She had 27 grandchildren by late in her life and gave each one a gift on his or her day, plus a little something sweet on the side – like chocolate candy.

In 1989, for her 80th birthday her family, her church and her many friends had a surprise birthday party for her at Holy Cross.  Of course, she wasn’t surprised.  One of her daughters made 80 cakes for the occasion. The whole event was described as “awesome.”

How much appreciation can one person earn?  However much, she earned it… as a wife, mother, grandmother, church member, assistant postmaster, community volunteer and all else in her life. Julia died in 1993. During this Women’s History Month, she deserves to be acknowledged.

However, the question remains – did Ida Niebauer serve on the Draft Board in World War II?

One thought on “Another Woman to Celebrate This Month…”